And I Met Her to cover 20 years of Zest

20 years in operation is a great achievement for any small business, particularly one in the arts industry like Zest Events International.

Just over 12 months ago I left a job I loved, in an organisation I despised, to start work as a Zestimite, for a woman who described one of our core responsibilities as ‘keeping the family fed”.

This family comprises a small but tight team of talented artists, lead by the confident direction of Creative Producer Andi Mether, and 2018 marks a significant milestone for the business. 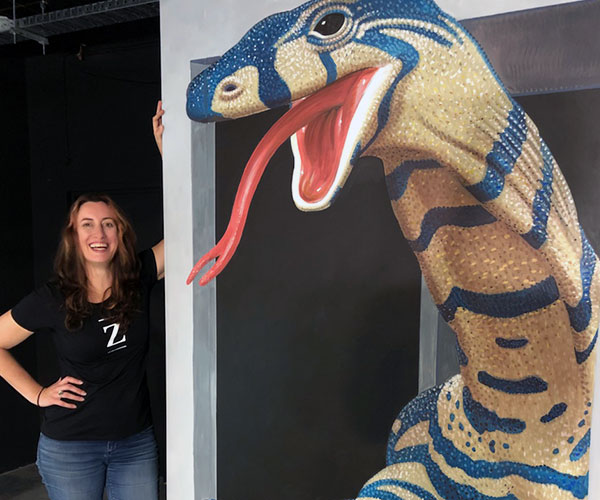 Zest came into being in a moment of career-crisis. Trained and working in the exhibitions design and events industry, Andi Mether had grown increasingly frustrated being pigeon-holed into narrow-focused roles.

“I wanted to be able to see a project through, from beginning to end” she explains.

“From assisting with events and exhibitions, and doing design work for hotels and nightclubs. I started collaborating with other organisations on the big, flamboyant corporate events that were being run during the 90’s.”

One of the craziest projects Andi ever worked on came about during this period. She was called in by an industry colleague to organise the Lost Cameleer Car Rally.

Designed for Voyages Hotels & Resort, the rally ran from Alice Springs to Uluru and saw 20 competitors participate in a mini-Amazing Race, travelling 500 km’s over 3 days. Zest researched the rally course, worked with local tourism businesses, negotiated sponsorship and organised events at each of Voyages Hotels & Resorts along the way. The competitors unravelled clues and participated in challenges like whip cracking and the unforgettable ‘Coo-ee Call’ at Standley Chasm. The event concluded on discovery of the The Lost Cameleer in Uluru’s The Lost Camel Hotel. It was a great team building activity and way to showcase Central Australia, but undeniably one of the most out-of-the-box projects Zest has been involved in!

In 2005, Andi took on a personal project, to start a ‘Chalk the Walk‘ pavement art festival in Australia.

“I knew a few European pavement artists and was excited about what they were doing overseas. I was able to use the skills and knowledge I’d gained in the events industry to make it come to life here.”

While it took a dedicated and frustrating 5 yrs to make the first Chalk the Walk Festival happen, the response from the artists, and the public, was fabulous.

“I met all these wonderful people, it was fun and helping the artists gave me a great drive in my event work… I never expected it to turn into a business!”

When the GFC hit in 2007, Andi had to make a tough call and let a number of her staff go.

She introduced artist management to the business and was able to continue collaborating with event organisers through the supply of artistic talent. This work now comprises more than half of Zest’s business.

How do you stay Zesty after 20 years at the helm?

Andi’s enthusiasm is directly linked to the way she works with her clients to bring their ideas to life. The opportunity to collaborate with all kinds of different people, and to see her team doing what they do best, to the best of their abilities.

“I particularly love the projects where we get to use art to make a difference” she says.

“Like the mural we created for the Heart Foundation and the City of Melbourne at Southern Cross Station. The project started out as an idea over coffee, followed by months of planning and working through red tape. But the outcome was a 20% increase in people using the stairs instead of the escalator – we’re actively changing behaviour”. 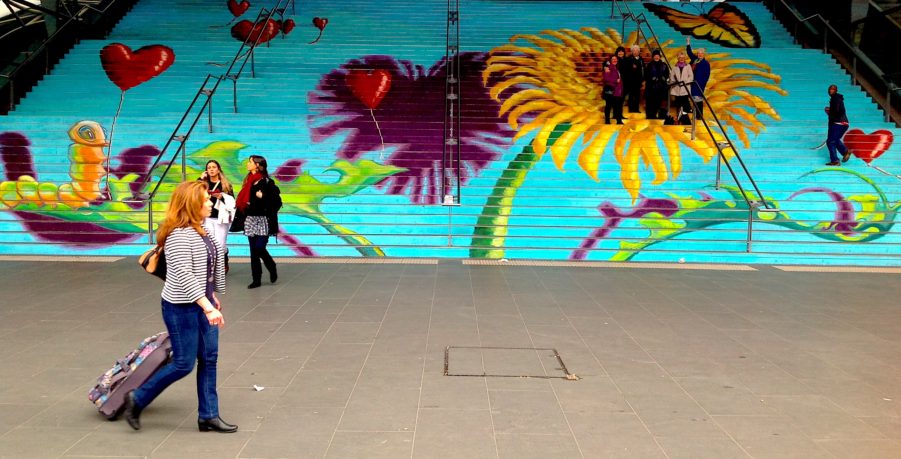 Put A Spring In Your Step 3D mural created on the steps of Southern Cross Station for the City of Melbourne and the Heart Foundation.

When asked what some of standouts are from the last 20 years, Andi replied with a laugh

“Creating Australia’s largest street painting, where we bought together a group of artists and worked with City of Sydney on a project of massive proportion.” 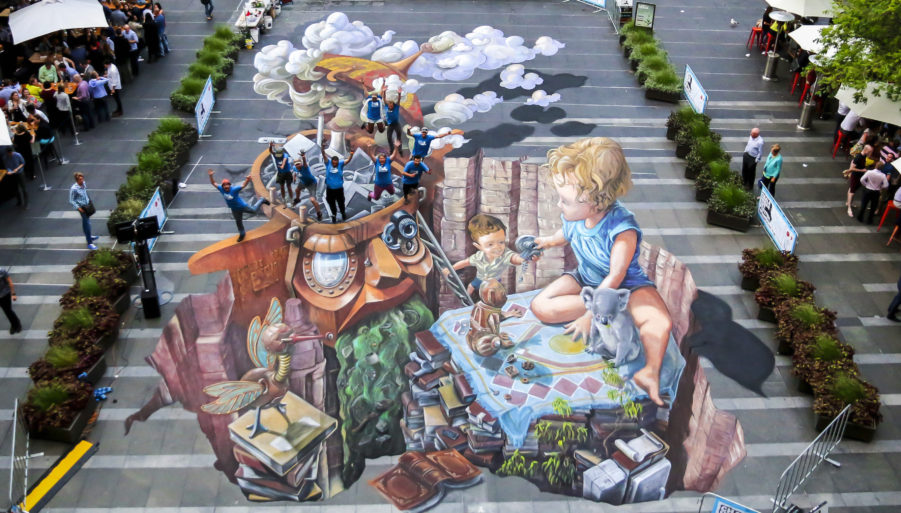 “Taking two of our artists to Italy to represent Australia in the World’s oldest and premier Street Art Competition… and winning gold!”

“Creating a documentary about that experience, which started out as a little idea, but it ended up screening on the SBS, onboard Qantas flights and overseas.”

“Helping local Councils target litter, waste and sustainability is also noteworthy, and working with regional communities where you can see on-ground differences and positive impacts on people’s lives.”

“Supporting the careers of our artists, seeing their talents grow, and importantly, providing an income stream to work with them on their career paths.”

Over the last 20 years, Zest has worked with everyone from ‘The Simpsons’ to Twinings. Collaborated with great entertainers like James Morrison, Anh Do and Katie Noonan, and organised events for Viagra and IAG. The documentary ‘CHALK: An Australian Perspective‘ is held in the National Film Archives in Canberra, where Zest also had a ‘west wing moment’ at Parliament House as Jenny McCracken’s painting for AMEX’s Shop Small campaign was unveiled. 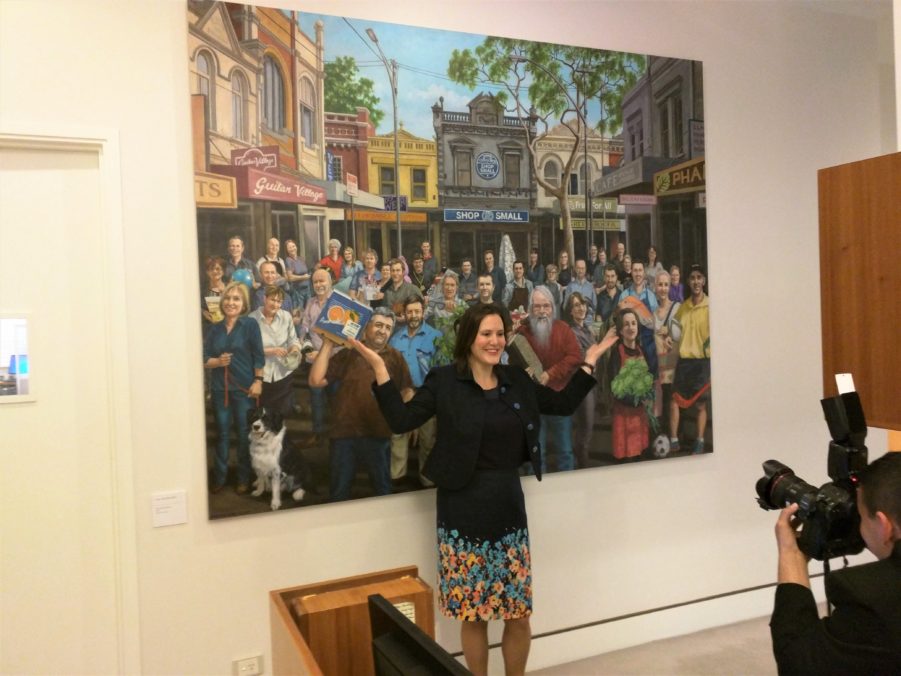 So, what does the future hold for Zest Events International?

“Zest headquarters is now set up on the Central Coast” says Andi “and this year we are running our first Chalk The Walk at The Entrance. We’re excited to involve more artists in the local community, and will be running artist residencies at HQ as well as a Pop-Up Gallery.”

“Having just launched a new website, we have plans to add to that with an online art shop soon. There are new artists coming on board and doing some great work, and I’m looking forward to more opportunities to curate and produce large art installations like the Trick Pic 3D art gallery we’ve just completed on the Gold Coast.”

“There a few large projects in the pipeline, I’m thinking about a book and I want to go BIG! I’d love to produce a major panorama mural!”

The secret to the success of Zest is attributed by no small amount to Andi’s determination, focus and ability to deliver high quality results for her clients and her team.

“What’s the worst that can happen?” she asks “You just keep going, take in the learnings along the way, put one foot in front of the other and do your best!”

“I’m forever grateful to all the people that have shared their knowledge with me and supported me through good times and bad. I can’t do what I do without a strong people around me – and that’s what we have. 20 years, we’re more like a family than colleagues, we plan together and move forward together. I’m looking forward to our next adventure.” 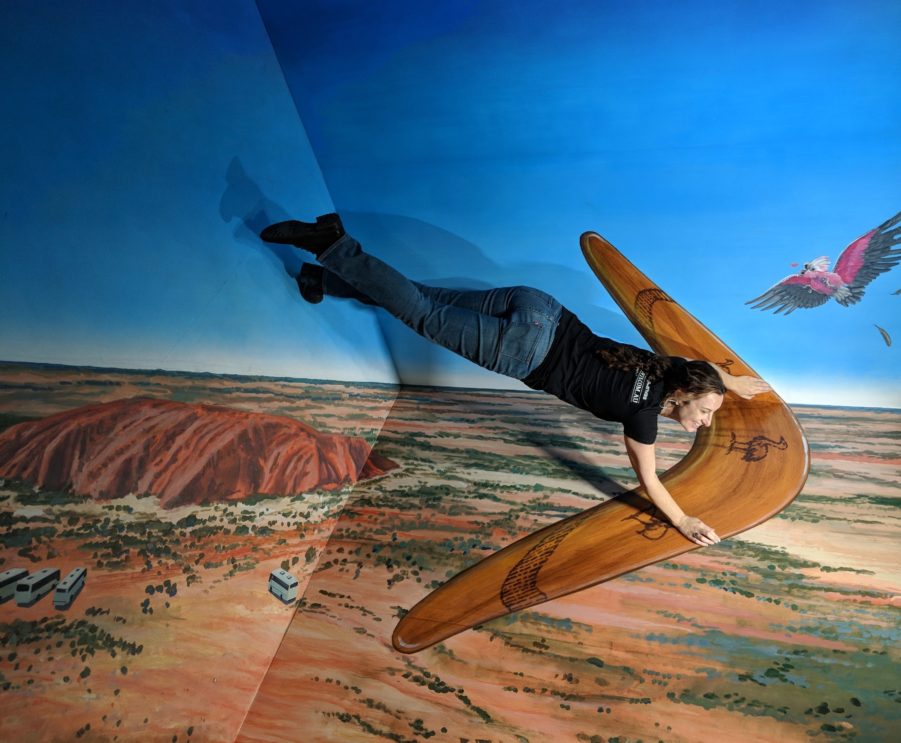 Gliding into the future with a smile and a Zesty twist. Andi poses in one of Jenny McCrackens 3D illusions.