The Jimmy Little water tower mural in Walgett is complete!  The 315sqm mural took 6 weeks* to complete and is already bringing tourists to town.  The mural is the initiative of Walgett Shire Council and was produced by Zest Events International. The mural was painted by artists Jenny McCracken and Frank Wright with Creative Producer / Project Manager Andi Mether.

Jenny McCracken is known for painting portraits, this portrait of Jimmy Little is the largest she has ever painted, it’s based on a photograph taken by John Elliott. Permission to paint Jimmy Little was given by his family.  Frank Wright is a Gamilaroi (Euahlayi) / Dhunghutti man, his totems surround Jimmy’s portrait. The colour and detail in the artwork have Jimmy Little singing once again! 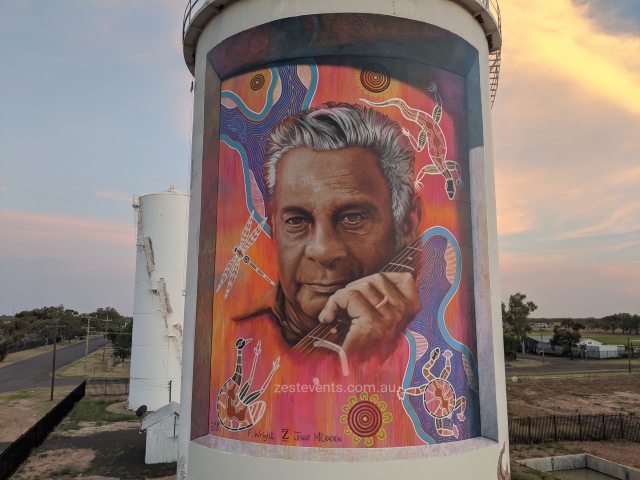 The realities of working on large scale murals

The project team faced many challenges on site, personal safety, equipment breakdowns and materials being compromised were all hazards constantly being monitored and addressed.  Projects like these operate as construction sites rather than art projects. Safety is paramount and working hours are adjusted according to the weather.  The team worked around wind and rain and try to beat the heat too – when it’s 30 degrees on the ground, it’s closer to 50 degrees up on the tower. Temperatures reached 42 degrees on the ground and wind speeds over 60km/hr.   A project like this takes a lot of preparation, we’re creating a legacy for the town, quality of materials are very important,  a huge thanks to Haymes Paints who came on board for this project, their brilliant colours and UV coating will see the Jimmy Little water tower mural standing strong for many years.

*The mural took 6 weeks to complete due to weather and equipment, an indoors project of this detail would take 3-4 weeks.

“Jimmy was chosen firstly as an outstanding Aboriginal individual for his commitment and promotion of Aboriginal performing arts and assistance for indigenous Australians with kidney disease. It seemed only fitting for him to be on the water tower as he was buried in Walgett with his wife, and he called Walgett his home.” 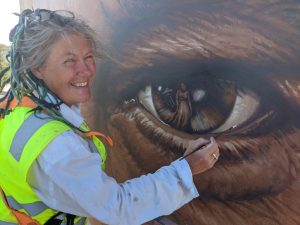 Jimmy was Australia’s first Aboriginal recording artist, ‘Royal Telephone’ was released in 1963 and sold over 75,000 albums.  Jimmy’s wife Marjorie Peters-Little was born in Walgett, she and Jimmy lived and are buried here. The gentle giant healed many people with his music in Walgett and around the country.  Above all, family was of utmost importance to Jimmy, his wedding ring is prominent in this picture if you look closely you can see Jenny McCracken has reflected Marjorie in his eyes.

“The night before my dad died, he had taken down the blown up poster size of mum from the wall, and laid it down on the bed next to him. This photo  is very possibly the last thing he saw,” said Frances Peters-Little. “I am deeply moved by all that you have done. This mural is amazing and truly beautiful. Jimmy & Marjorie would be so proud”.

Walgett, Namoi Village and Gingie Mission are represented, along with the two rivers and local totems of the sand goanna, dragonfly and emu. The long neck turtle is Jimmy Little’s totem.

“We are very proud of the Jimmy Little water tower mural, we got to know Jimmy’s family through the project and learn more about Gamilaroi Country.  We want to extend our thanks to the Council for inviting us to be part of this cultural collaboration, and the local community and Peters-Little family for their knowledge, support and making us feel welcome in Walgett,” said Project Manager Andi Mether.

“The best time to view the mural is sunset, it’s a great opportunity for travellers to stay in Walgett and experience the region and learn about other local legends we’ve heard so much about.”

The story of the artwork surrounding Jimmy Little’s portrait

The totems included in the Jimmy Little water tower mural are by local artist, Frank Wright, they form a map of Walgett.  Andi Mether and Frank Wright recorded this information and Gamilaroi translations while working on the mural. 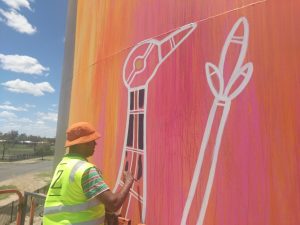 Fish are a source of food in the river, the fish depicted represents cod (gudu), yellowbelly (dhagaay), bream (gambaal), and catfish (gaygay). Sandbanks are represented by white lines within the river

The circles surrounded by u shapes represent campsites and people sitting around them.  The one on the left between the two rivers represents Namoi Village, the large one on the right represents Walgett and the one at the bottom represents Gingia Mission.

Sand goanna / Biiwii:  Represents the whole of Gamilaroi country and the Gingia Mission

Dragonfly / Murrumanamanaa:  The totem of the Gamilaroi people from the Barwon side of the river which is known as the Euahlayi Nation

Emu / Dhinawan: Frank Wright’s totem, and also that of several Aboriginal people in the Walgett area

Long neck turtle / Girrabirrii: This is Jimmy Little’s totem*, his father’s totem is the black duck, he is a Yorta Yorta man.

*Aboriginal people take on the totem of the mother, e.g. the long neck turtle is also the totem of Frances Peters-Little and in turn her son.

As a general rule Aboriginal people do not eat their totems, instead they protect that animal.

Zest is working on multiple cultural collaborations with Councils and Aboriginal communities in regional Australia.  Contact us to discuss your next project.