Providing a fitting face lift for the Gunnedah Water Tower Museum, the mural commemorates the town’s rich Vietnam Veteran History and delivers a boost for not only the Historical Society that runs the Museum but also the local economy. 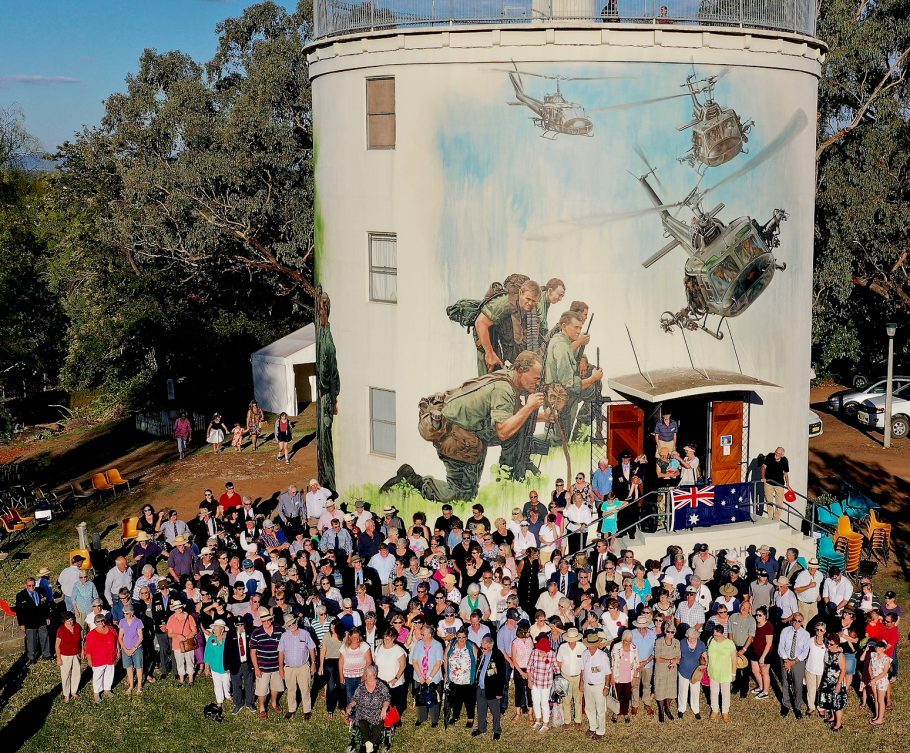 The team at Zest Events International were contracted to provide the expertise to ensure the project was delivered to a professional standard, on-time and on-budget. Anyone that has embarked on planning for a large scale mural understands what a massive undertaking it is – but the team at Zest were up for the challenge.

Our Creative Producer, Andi Mether was called on to assist with planning, consultation, logistics, design and marketing phases of the project. While Lead Artist Jenny McCracken, brought years of experience to help advise on concepts, materials and on-site artwork production. Together they dove right into the historical content to ensure they delivered the perfect mural for such an important project.

Click here to see footage of the production of the mural. 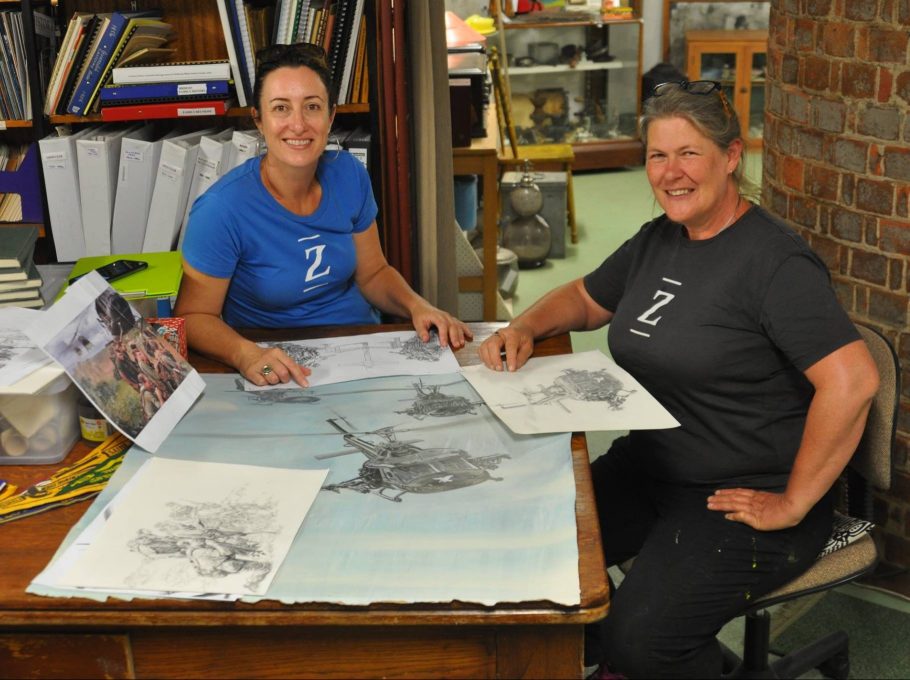 This year marks the 50 year anniversary of the epic Battle of Long Tan, which inspired the Gunnedah Historical Society to start researching local Veterans.Their research uncovered a rich local history, with over 50 Vietnam Veterans hailing from the region.

Local man, Peter Capp features in one of the most famous photographs of the Vietnam War, captured by Michael Coleridge in 1967. This image was used by Jenny as a reference for the main facade of the new mural.

While Peter was quietly humbled by this recognition; it fostered an enormous sense of pride in the Veterans present at the launch and brings fresh relevance to the sacrifices made by local community members that were servicemen. 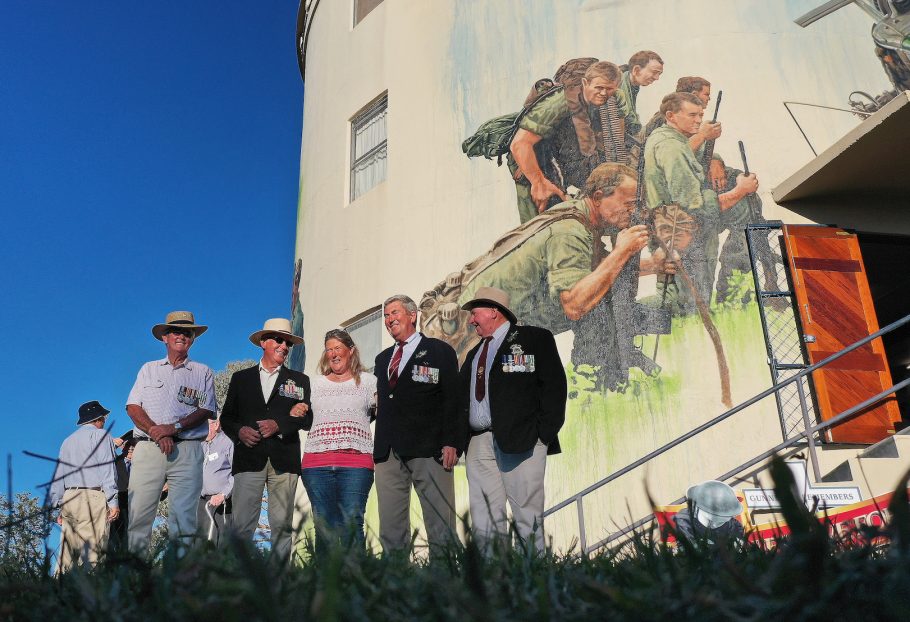 On receiving a drought assistance grant, the Gunnedah Historical Society and Gunnedah Shire Council commissioned Zest to design and produce the new murals for the town.

Our mandate was to not only create a beautiful commemorative artwork the town could take pride in, but to produce an attraction that would bring visitors and economic stimulus to the town. 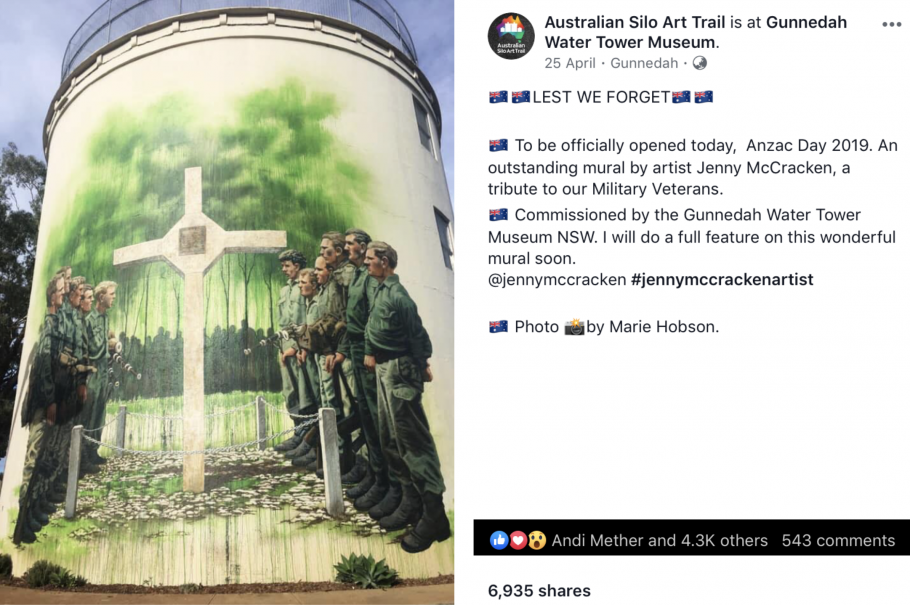 Social media frenzy: Photos of the murals launched on Facebook receiving over 4.3K reactions and 6,000 shares!

The launch of the murals on Anzac Day 2019 was a huge success with the local community flocking to the site and veterans travelling from all over Australia to take part in the emotional tribute. Interest across national media and social media platforms has been overwhelming and the town of Gunnedah has already seen an increase in visitor numbers at the Museum and a trend toward tourists prioritising the town as a ‘must see’ destination during their travels.

Just as importantly, the local community has bolstered the success of the project, assisting with promotion and interest in the artwork as well as providing ongoing donations of equipment and labour to improve the facilities at the site. Recent enhancements have included night lighting, interpretive signage and seating outside the Museum for the visitors stopping by. 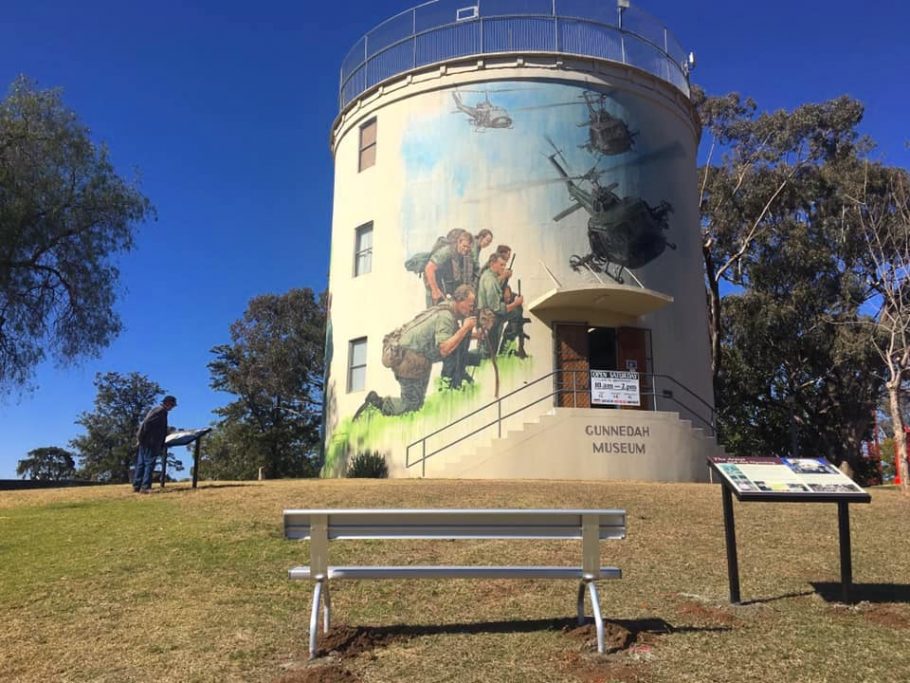 An historical face lift: Front on image of the Gunnedah Water Tower Museum

It’s been an absolute pleasure to be able to lend our experience to such a great project, helping to create a legacy for the Museum and the town. To top it off Gunnedah is now a solid addition to the Australian Silo Art trail, capitalising on tourism interest to keep their great little community ticking… and we’ve made some good friends along the way!

But don’t just take our word for it! Marie Hobson from the Gunnedah Historical Society had a few words to say about working with us on this important project:

The launch was an emotional event for the Vietnam veterans..lOur museum on top of ANZAC Hill has suddenly became a place of pilgrimage for our veterans and a tourist attraction for our town. We have seen a huge increase in visitor numbers to the water tower, and the whole town is reaping the benefit. If our society could raise the funds we would immediately engage Zest to complete a third mural on the eastern wall.

Planning a major artwork in your home town? Avoid some of the pitfalls – Contact Zest!

Need help planning your next large scale mural? Contact Us!

PSST! Consider your impact – large murals can result in a large mess. High imprint – Low Impact is our mantra! How much waste was created in the production of the Gunnedah Mural? Click here to see!